All Science is Anthropological at the Margins

It is no secret that hard science folks (think Physics, Engineering, and Math majors) sometimes look down on the “softer” sciences for being less rigorous. There is a joke that a professor from my college once told, which I’m copping directly from a former classmate’s blog:

The library at the Princeton Institute of Advance Study was divided into two wings. One wing was for the sciences, which included all the updated journals in math, physics, etc. The other wing was for the humanities, which had the analog journals in history, literature, etc. Given that this was an advanced institute, these scholars spent a great many hours in the library, in their respective wings. One day, Kurt Gödel had enough, gathered a stack of journals, walked to the central librarian, and stated that these journals have been shelved incorrectly. The librarian looked puzzled because all the call numbers to the anthropology journals were correct. In response, Gödel supposedly shouted, “These surely cannot belong in the science wing!

As much as anthropology can’t get no respect, I’m starting to notice a funny trend in the classes I’m taking in grad and med school as compared to college. Introductory science and mathematics classes in college are very didactic: you learn principles and their applications. Although in introducing a topic professors talk a little about its backstory—e.g., how Rutherford’s experiment with gold foil led to the development of the Rutherford model of the atom, which became the Bohr model—the who and the why is secondary to grokking the setup, the principle demonstrated, and its logical consequences.

And that is in fact a wonderful thing about math and science, and a large part of why I liked it throughout grade school: rote memorization was de-emphasized to the point of remembering only a small set of principles, and the skill lay in combining and applying them. By contrast, history courses seemed to be full of details that had to be slowly committed to memory with little to tie them together except that things happened to turn out that way. Whereas knowing F = dp/dt could take you very far in solving a multitude of physics problems, knowing Moctezuma took power in 1440 would not help you guess how long he stayed in power, how he died, or much else about his life or Aztec history.

There is a tide shifting, however, in my grad school courses on the biomedical sciences. Whereas the principles taught in college are usually well established, once you reach the fringes of what is known (i.e., results from just a few years ago), there are enough potholes that the multiplicative benefits of combining prior knowledge breaks down. For example, here’s a slide from a developmental biology lecture I had this week: 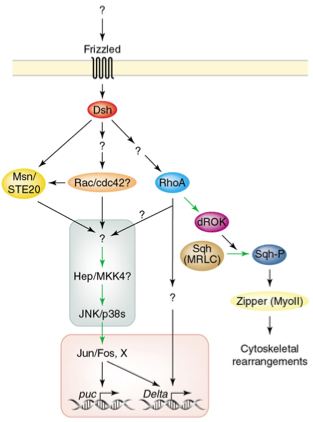 There are almost as many question marks here as named proteins! It turns out that this is the “non-canonical” Wnt pathway, which the lecturer happens to research in his own lab. That name already tells you a few things: that there is a “canonical” pathway (the one enshrined in Alberts’ MBOC, of course), that this one is less established, and that people don’t completely understand the relationship between the two yet. The fact that one pathway is “canonical” is a complete accident, since that one would have likely been considered differently had it been discovered later, or at the same time as the “non-canonical” pathway.

This is starting to sound as arbitrary as history, right? It is, and the reality is that in order to do research at the fringes of science, particularly in super sparse fields like the life sciences where there are a lot less researchers than things to study (there are possibly billions of molecular interactions that take place in the human body), you need an anthropological backstory of what you are studying. That includes: 1) who worked on it and what else they worked on, 2) why they started working on it, and 3) what their assumptions were. Not only is it helpful for understanding how things in the subfield were named—gene names have a tendency to get really fanciful1—but it is crucial for properly evaluating the claims made and the way the evidence is presented.

Speaking of naming things: odd names pop up just as frequently in Anatomy and lately, Histology. For better or worse, many of the cells in the body were named by histologists who were working in the late 19th and early 20th century and could often see a lot more than they could understand (certainly at a molecular level). Also, what they saw depended on the stains they chose. The result is that in the 21st century, we still use names like “enterochromaffin cells”, “eosinophils”, and “basophils,” which have nothing to do with the function of the cells, but reflect the stains that revealed them on microscope slides.

So lately, science classes seem to be more and more dependent on the history and people behind them. A unit on a particular cellular transport mechanism, summarized as “this person argued for this controversial idea, the more established groups vehemently responded, and a great solution was overlooked for years because the author died before he was recognized” could equally describe a history of cultural movements in 19th century France. Is there something to be learned from this? Well, a new scientific hypothesis has much in common with a cultural movement: when only a few labs are willing to come up with supportive data, how the greater scientific community will respond depends quite a bit on the kind of the people behind it, how well the idea is marketed, and the responses of others with vested interests. (A 1% rule borrowed from web design is probably appropriate here: for every 100 people that hear about your great idea, 10 will actually understand it enough to care, and maybe 1 will do something about it.)

The beauty of science is that data trumps all, as my dad says. The tough news is that getting enough other people to hear your idea and generate data about it, to the point where it becomes a principle that stands on its own, is an anthropological problem. That’s why it takes two decades from an initial (amazing) result to get a Nobel Prize, assuming of course that it is even awarded to the right person. Until then, to make sense of brand-new science, you have to learn just as much about the people behind the ideas, because that is often the only way to comprehend and contextualize what they are trying to say.